Mrs. Henrietta Lacks (b.1920 – d.1951) was a woman whose cells, harvested from her cervix and abdomen without her knowledge, became the first known immortal human cell line vital for the development of the most important tools, procedures and research in modern medicine. Polio vaccine, cloning, gene mapping, in vitro fertilization, cancer research and more.

Enter Mayurasana whose anatomical focus is the abdomen, a bodily metaphor for the source of life and strength. Also named “Peacock Pose,” it is a symbol of immortality and love and is to be held parallel to the Earth with the entire weight of the body resting on the core. Henrietta Lacks is the core of the issue stretching forever in both directions, past and future. She is immortal and from her a new world has emerged.

Execution: Kneel on floor. Insert elbows into midsection with palms facing up and thumbs facing outward. Lean forward while pressing palms firmly into floor with fingers facing back towards knees. Bend elbows to 90 degrees and lower torso onto elbows while holding abdomen firmly against pressure of elbows. Squeeze glutes, straighten legs, lean body weight slightly forward and simultaneously lift torso and legs off of floor into position in which entire body is parallel to floor. Maintain balance and hold for intended count; repeating thereafter. Breathe deeply throughout.

Ladies who LUNGE. On the way to lunch, of course. Allison D., Jen H., Caroline W. and Jennifer B. of New York, NY 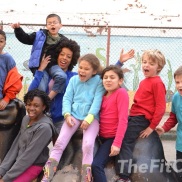 We’re in this together! | Kids!

Uptown Dips | Move of the Week 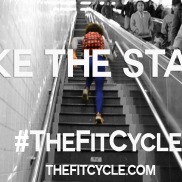 Take the Stairs! | Move of the Week

HOOP in the mat. Yeah, I did it. Obaro E. of Los Angeles, California
"Andia Winslow's Viral #TheFitCycle Are Smartest, Sexiest Workout Videos Ever" --Forbes

The Write Fit, a blog